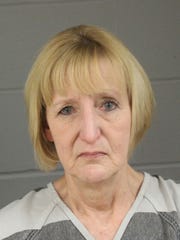 Attorneys for a woman charged with murder in a 1981 former cold case involving the death of a baby want to suppress DNA evidence police obtained from her trash, saying doing so violated her rights.

Theresa Rose Bentaas, 58, was charged with first- and second-degree murder in March 2019 after DNA evidence matched her to a baby who in 1981 was found wrapped in blankets.

Baby John Doe, named Baby Andrew by the anonymous donor who paid for his funeral, was found in what is now 33rd Street and Sycamore Avenue, with the umbilical cord still attached.

Sargent and co-counsel Raleigh Hansman requested the following evidence be excluded from trial, saying it violated her Fourth Amendment rights:

“As a free member of the general public, law enforcement’s extraction of Bentaas’ DNA from the items pulled from the trash and the subsequent creation of her DNA profile for the testing of Baby Doe case constitutes an unreasonable search under the Fourth Amendment,” Bentaas’ attorneys wrote in the brief.

Pulling the trash was lawful under both South Dakota and federal law, but extracting the DNA from the items from that trash pull is a “separate invasion of privacy…that must be considered a separate search under the Fourth Amendment,” the brief states.

If a Fourth Amendment violation is brought up in a case, the defendant must establish a factual connection between the alleged constitutional violation and the challenged evidence.

If Bentaas were to prove the evidence is “fruit of the poisonous tree,” the burden would shift back to the government to show that evidence is untainted.

“The decision to seek a search warrant for Bentaas’ DNA only after receiving the DNA results from the trash pull items speaks for itself,” Sargent writes.

The grave of Baby Andrew John Doe, an infant who was found dead in a ditch in 1981, is shown. Police arrested Theresa Rose Bentaas decades later on Friday, March 8, 2019 after determining through DNA that she was the mother.  (Photo: Loren Townsley / Argus Leader)

The brief accuses law enforcement of exaggerating lab results. In January 2019, when Parabon Labs got a DNA match that was possibly “up to a third cousin” in the family tree for Baby Andrew, a detective took the information to put together a basic family tree, according to the brief. The family tree was shared with a Parabon genealogist, who recommended getting follow-up DNA.

“Under the guise of the trash pull, Detective Mertes circumvented the search warrant requirement for DNA and deprived Bentaas of her Fourth Amendment right against unreasonable search and seizure,” Bentaas’ attorneys wrote in the brief.

The state’s “failure to obtain a search warrant to extract, test and sequence the DNA on the items submitted to the SD Forensic Lab violated Bentaas’ Fourth Amendment right against unreasonable search and seizure,” the brief states.

The state had not filed a response as of Friday.

How we got here:

Up until March 8, 2019, Bentaas was a member of the general public, the brief goes on to say, which gives her greater privacy interest in her DNA.

Baby Andrew’s body was exhumed in 2009 and sent via FedEx to the University of North Texas, were DNA was extracted. The body was returned to Sioux Falls, where it was buried at St. Michael’s Cemetery on Cliff Avenue.

From 2010 to 2018, the DNA profile of Baby Andrew was run through the South Dakota DNA database once per year. No matches were found.

On Jan. 24, 2019, Parabon NanoLabs, Inc. — a Virginia company to which Sioux Falls police had sent Baby Andrew’s DNA — completed a “Genetic Genealogy Report,” a lead-generation tool to identify remains by making connections through DNA and genealogy.

A DNA profile found possible family trees, include “what they had found so far was approximately a third cousin which was fairly far out from the direct DNA of this baby,” according to the brief.

Theresa Rose Bentaas, 57, was arrested Friday morning after police determined through DNA that she was the mother of Baby Andrew. Argus Leader

Police obtained a search warrant for buccal swabs from Theresa and Dirk Bentaas.

Female DNA found on a water bottle, Coors Light can and cigarette butts from the trash pull “could not be excluded as being from the biological mother of Baby (Andrew) Doe.” DNA from two different men was also linked to Baby Andrew.

Police interviewed Dirk and Theresa Bentaas later in February 2019. Police did a cheek swab on both. In that interview, Theresa Bentaas said she was “young and stupid” and admitted to being pregnant in 1980-1981.

Theresa Bentaas was arrested in March 2019. She posted bond and has been out of custody since May 2019. Bond conditions included that she be required to wear a GPS ankle monitor, hand over her passport, check in at her attorney’s office once a week and live with a family member.

Formula Vee: The brothers Caruso are making up for lost time – RACER