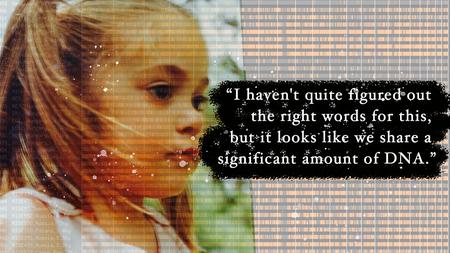 This week, 101.9 WDET’s StoryMakers program shared the true tale of Laura Khalil, a metro Detroit storyteller and public speaker who submitted her DNA to 23andme and learned that her father wasn’t her biological parent, and that she had nine half siblings to boot.

It’s an inspiring and original story. You can listen to and read the whole story here.

It’s also something that many people now experience with the proliferation of companies like 23andme, Ancestry.com and mail-in DNA testing.

Khalil stopped by Detroit Today with Stephen Henderson, along with Brianne Kirkpatrick, a DNA consultant and counselor, to discuss the sometimes thorny and delicate questions that come with modern-day DNA testing.

“I was born to a single mother, and I was an only child. My mother was very open with me, so the fact that I was born by artificial insemination wasn’t a surprise. But finding out I have siblings was a surprise. I grew up always wanting siblings, and now I have an entire gaggle.”

“I’m 56-years-old, and last January I found out that my dad is not my biological father.

I did Ancestry, because when 23andme gave me my results it said I was Italian. I grew up thinking I was Irish. If I hadn’t done Ancestry, I wouldn’t know my dad was not my biological father. And I found out my brother, I had thought he was a half brother, but he was my full brother. It turns out our biological father had died when I was three years old.

Our dad was in the Navy, and [mom] was living in Queens, New York, working at the restaurant that my biological father’s family owned.

My identity was in crisis. I had siblings I didn’t know of. Dad wasn’t my biological father. For my brother Danny, it was a huge thing for him. He didn’t want to do the test. When he did it, he broke down over it. It’s not been easy, the transition, but it’s getting better. I went down and met my brother and my sister in Florida. I visited them recently.”

“My brother and I are adopted, and my brother college-aged son wanted a DNA kit. So my brother got him one. And when my nephew got the results, he got an email from someone who said, ‘I think I’m related to you.’ It turns out my brother has two sisters who didn’t know about him.

One sister’s more open than the other. He hasn’t met either one of them, they didn’t really know he existed. The reason that I called is there’s a privacy issue. I’m adopted, I’m not going to do [DNA testing.] I don’t want to crack open that can of worms. But also you have to consider and be sensitive to the identity of the people that may be related to you. Perhaps there’s a birth parent who maybe kept something to themselves. My brother’s mother is passed away, so he can’t ask for her reasons.”

“My story is a little different. My mother passed in 2006. Two days after she died, all the family secrets came out. In 1958, my sister was born. My mother was Amish at the time. She was shunned and kicked out of the family, and they kept the baby. I had met my sister, I actually remembered saying to my mom, ‘She’s weird, what’s wrong with her?’ The sibling rivalry was already there. How far of a net, how wide, are these ancestry DNA tests? I don’t even know if my sister is alive. I know I have one niece who is Amish. Some people in the family think she may have other family who are just out there somewhere.