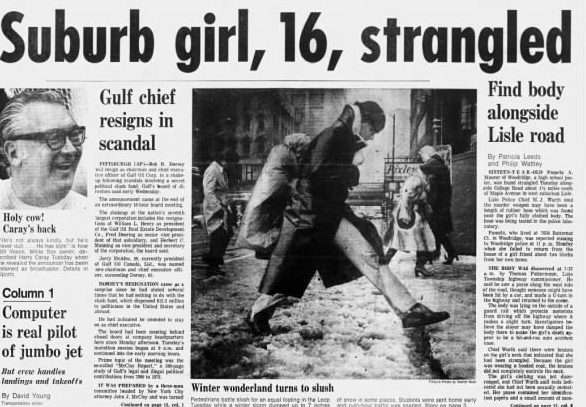 The 16-year-old vanished into thin air and was never seen alive again.

Her frozen body was found the next morning on the frozen plains outside Lisle, Illinois.

She had been raped and strangled.

Finally, after 44 years of anguish, cops have named the monster who snatched and killed poor Pamela.

“For 44 years her murder remained a mystery,” DuPage County State’s Attorney Robert Berlin said. “We finally put a name and face to this monster.”

The magic elixir for solving the case was DNA and genetic genealogy.

So, just who is the “monster?”

He is almost certainly a serial killer and detectives believe he murdered at least 12 people.

But he won’t be around to face the music. The killer, then 29, accidentally slashed himself to death in 1981 while murdering an 18-year-old man.

His body was found lying on top of his victim.

Cold case detectives got their first break in 2001 when “biological evidence” was recovered from Pamela’s body.

Genetic genealogy also pointed them to the killer.

Since the Golden State Killer was nabbed in April 2018 around 100 cold case suspects have been identified through genetic genealogy. It is a game-changer.

And in 2019, investigators exhumed Lindahl’s body and his DNA matched that of the killer’s.

Now, cops are picking up the threads and tying Lindahl to other homicides.

“We have evidence that there may be other young women who were victimized by Bruce Lindahl between 1974 and his death in 1981,” Berlin said.

In 1980, Debra Colliander escaped naked from the killer’s house after he kidnapped and sexually assaulted her.

Lindahl threatened the terrified woman with a gun and took nude photos of her. He was sprung on bail.

The killer told a pal: “A girl had pressed charges against him for rape, and that if the girl did not appear in court, he would get out of it.”

Two weeks before the trial, Colliander vanished. A jailbird pal said Lindahl offered him $2,000, a pistol, whiskey and pills to “get rid of the victim.”

Two years later, her slain body was discovered buried in a shallow grave.

By then Lindahl had also pegged out.

“There’s a lot of work to be done,” Det. Chris Loudon told CBS News. “We know this monster. Now we need to find out who are the other victims of this monster.”

Inside the monster’s lair, detectives found scores of photos of young women. Included is Deborah McCall, 16, who was last seen after school in 1979.

They found Ana Meija dead with her throat slashed and 23 other stab wounds on Dec. 8, 1994, inside her Long Branch, New Jersey apartment.

Baby formula had been smeared across the young mother of two’s lifeless face.

Meija’s children, a one-year-old and three-year-old, were unharmed.

His wife, Delores Connors, found his body when she got home from work. Meija was Delores’ sister.

Now, Delores, 66, her son Ted, 47, and a third person named Jose Carrero have been arrested in the cold case killings.

Carrero, 49, was nabbed in New Jersey. The mother and son were arrested in Delray Beach, Florida. Meija was Delores Connor’s sister.

According to cops, old confessions and new proof of insurance payouts sealed the deal.

“The information given to (the friends) by Ted Connors and Jose Carrero is supported and proven to be true based on additional information discovered and confirmed in the current review of the file and additional investigation conducted over the last two years,” the affidavit reads.

The trio is all charged with first-degree murder.

What’s hiding in your DNA? Being informed and prepared for the unexpected critical to commercial genetic testing kits, says lawyer  SaltWire Network

What’s hiding in your DNA? Being informed and prepared for the unexpected critical to commercial genetic testing kits, says lawyer – TheChronicleHerald.ca

What’s hiding in your DNA? Being informed and prepared for the unexpected critical to commercial genetic testing kits, says lawyer  TheChronicleHerald.ca

Going the Distance: How DNA Enhancers Communicate with Their Target Genes – On Cancer – Memorial Sloan Kettering

Can DNA be used as circuits in electronic devices? – The Jerusalem Post