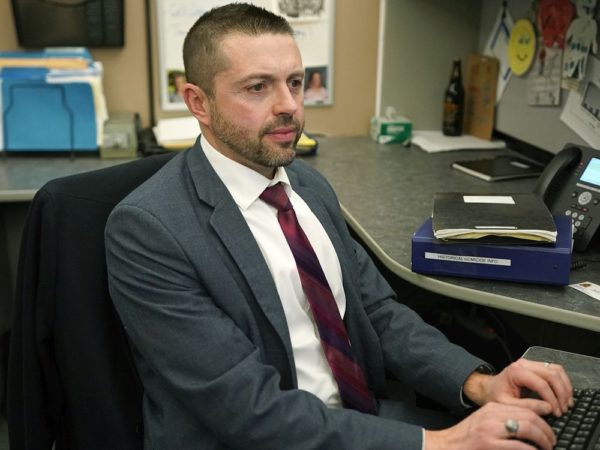 GEDMatch rose to prominence when police used it to identify Joseph James DeAngelo — the alleged Golden State Killer — and charge him with a string of murders, home invasions and sexual assaults that took place in California in the 1970s and 80s.

When Tebb read how police tracked down DeAngelo using GEDMatch, “I thought … this is going to be an opportunity for us to potentially close some files and give some answers to some of our families.”

“It’s not viable for every investigation, but there’s certainly going to be opportunities.”

Edmonton police currently have 204 unsolved homicides on the books, which are the purview of Tebb’s historical crimes section.

The unit now has four cold case homicide investigators in addition to Tebb.

In 2018, the unit began a top to bottom review of their files. They picked out cases with unidentified DNA profiles that could be submitted to one of the consumer genetics websites.

Usually, when Edmonton police encounter a crime scene with genetic material from an unknown suspect, they collect a sample and send it to the RCMP lab, which performs what’s known as nuclear DNA analysis.

“Historically, when we develop a DNA profile, it’s compared against the national DNA data bank,” Tebb said. Absent a hit, it sits on the data bank as an unknown male or unknown female profile.

Typically, police would only get a hit if a judge had ordered that person’s DNA added to the data bank. “The national data bank doesn’t even allow us to look for relatives,” said Tebb. “It has to be a direct hit, it has to literally be that person.”

Genetic genealogy services, on the other hand, have a much broader set of data from people interested in what their DNA can tell them about their health or their family history. Police on the Golden State Killer case identified DeAngelo by uploading a DNA profile from a rape kit to GEDMatch, which identified a handful of distant relatives.

With the help of a genealogist, investigators built a family tree with DeAngelo at the end of a branch.

Nuclear DNA’s ability to identify familial relations is “pretty limited,” Tebb said. On the other hand, SNP data can identify even distant cousins, someone the suspect might not have even met.

“You’re really hoping that there’s some kind of familial relation that’s close enough that it becomes viable for us to track it down to the source of the DNA,” Tebb said.

Recently, GEDMatch came under fire for a provision in its terms and conditions that allowed law enforcement to access the database for criminal investigations. It has since allowed users to opt in to assist police, which Tebb said drastically reduced the number of individuals they could compare against. “Only recently are their numbers starting to climb.”

Because of the cost of submitting samples and the sheer amount of work required to assemble a family tree once a hit comes back, Tebb said police have to be selective.

“We’re not just going to blanket send every (file).”

Tebb added they’re aware of the controversy surrounding police use of genealogical data, but said he’s confident the evidence would hold up in court.

“Certainly there’s potential challenges coming from the charter in relation to our use of this. But I think we’re pretty comfortable that this is something that would be viable in a criminal prosecution.”

Discovering My Incredible Genetic History – View from the Bleachers – seattlepi.com

Discovering My Incredible Genetic History – View from the Bleachers  seattlepi.com