The names of 13 men from Sutersville who never came home from World War I and II are engraved near the top of Sutersville’s Honor Roll that recognizes those who served. A 14th man killed in the Korean War is listed on a separate plaque.

Making certain that they will not be forgotten with the passage of time, which has been more than a century for the World War I soldiers, Mark Ghion of Sutersville has done extensive research over the past year into the circumstances of the lives and deaths of the men with stars beside their names.

“They just need to be remembered. Right now, they’re just names on a piece of metal,” said Ghion, 52, whose father, Alvin Ghion, is listed on the Honor Roll with 156 other men from a town of 937 that served in World War II. The elder Ghion, who died in August 2018 at 95, was the last of the town’s living World War II veterans, according to his son.

To memorialize those war heroes, Ghion wants to have a framed photo of each fallen hero, containing information about their lives and military service, that would be hung in the Sutersville Borough Building. The building along Municipal Avenue, which also houses the fire department, once was the Sutersville Elementary School.

“I wanted to introduce them to the people in town,” said Ghion, who is chief of the Sutersville fire department.

Ghion has spent countless hours on the internet researching military records and talking with townspeople and relatives of the victims to create thumbnail sketches of the men’s lives. He has searched military records for wounded personnel admitted to a hospital and the Army’s mortuary affairs branch on deceased soldiers. A genealogy website provided some information for his research, as well as compensation records, Ghion said.

He has even contacted a Netherlands man who has knowledge of a downed WW II aircraft in which a Sutersville airman, William “Harry” Green, died when the plane was shot down in Germany in 1944, Ghion said.

Ghion said his military background serving with the Army’s 82nd Airborne Division in the 1980s has been very helpful in knowing how the system of military records works. One of the challenges he faced in gathering information was that Army service records from 1912 to 1965 were destroyed in a fire at the National Personnel Records Center in St. Louis in July 1973.

Ghion said he started his research when Sutersville Mayor Alaina Breakiron had asked for some assistance in compiling background information on those service members from Sutersville who died while serving their country.

“Every year (Memorial Day), we remember their names, but nobody knows the person,” Ghion said.

“I started looking into it and I’ve spent a year doing research,” Ghion said. “It’s becoming more of an obsession for me.”

While there is information available in a booklet about soldiers from the Greensburg area who were killed in action, Anita Zanke, the librarian for the Westmoreland County Historical Society, said she is not aware of anyone compiling that much information on a town’s war dead.

There is a lot of information to sift through “to determine what is relevant and what is not,” Ghion said.

Ghion has found that the memories of the relatives of the fallen soldiers, especially when it comes to various dates, sometimes conflicts with the military records.

“I’m piecing together what makes sense. It is amazing,” Ghion said.

Ghion has created a Facebook page and a video to share what he has learned about the “14 sons of Sutersville.” The video features footage from the National Archives taken during the Meuse Argonne Offensive in 1918, Ghion said.

“If we don’t make an ongoing effort to remember and pass on their stories of the sacrifices made by these men, we may forever lose the ability to recall them for future generations,” Ghion said at the town’s Memorial Day service this May.

Four soldiers from Sutersville died in World I, nine in World War II and one in the Korean War. Most were brought home to be buried in the Sutersville area, but the remains of a few are still missing.

Those Sutersville soldiers who died in World War I were killed in the intense combat of the Meuse-Argonne Offensive in the last three months of the war, before the Armistice of Nov. 11, 1918. Ghion learned that Albert Waters, who died 31 days before the war ended, was involved in the same assault in France, where famed war hero Sgt. Alvin York received the Medal of Honor.

The body of World War II B-17 navigator William Green, along with four other members of his crew from their plane that was shot down while on a bombing mission over Germany in November 1944, has not been recovered.

Ghion’s search for Green’s background was hampered by the fact that he was listed on the Honor Roll as Harry Green. The mystery unraveled when Ghion found Green’s sister, who was his first grade teacher in Sutersville. He learned a Netherlands man had adopted the airman’s crew and maintains a memorial site in the Netherlands, as well as a website.

Ghion said information he has received indicates the crew might be buried in a German cemetery in an unmarked grave. Ghion said he hopes to get DNA from one of Green’s relatives in New York so the Army’s Casualty and Mortuary Affairs branch may be able to match it if the crew’s burial site is found.

“We like to see him come home. Right now, he’s laying in some unmarked grave in Germany,” Ghion said.

Daniel C. Bain was one of the men lucky enough to survive the infamous Bataan Death March when thousands of Americans were taken prisoner after the 1942 surrender of Corrigedor in the Phillippines. However, Bain died in a Japanese prison camp, before American special forces conducted a raid on the POW camp, Ghion said.

Bain’s body was brought home for burial, then exhumed about five years ago and the remains sent to a DNA lab in Hawaii. It is possible the Japanese buried Bain with other prisoners, whose remains have yet to be identified, Ghion said.

One of the men whose name is on the memorial actually survived World War II, but died in an accident after the war, while still on active duty, Ghion said.

Joseph Feltes was killed when he fell off the Great Pyramid in Egypt in November 1945.

Frank Barber survived the D-Day assault on Utah Beach on June 6, 1944, only to be killed about a month later during combat in Normandy, France.

Mark Ghion of Sutersville points to the town’s Honor Roll that recognizes soldiers from Sutersville and nearby Gratztown who served in World War I.

Mark Ghion of Sutersville views the town’s Honor Roll that recognizes those from Sutersville and nearby Gratztown who served in World War I. There are stars besides four names atop the list, denoting they were killed during the war. 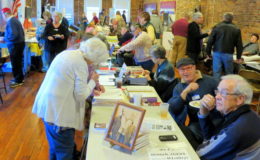